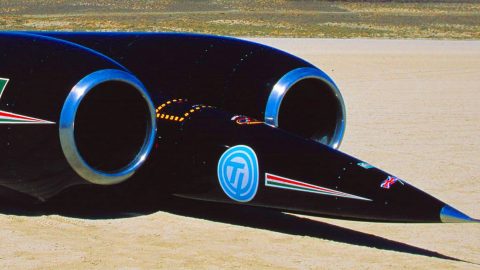 The introduction of the jet engine thrust the world forward into a new era of innovation that has formally become known as The Jet Age. Planes all over the world benefitted from jet technology in everything from transportation, commercial travel, and combat. Meanwhile, the ground vehicles were still using the same old combustion engine, so one has to wonder what a car would be like with jet engines.

There have been some fast cars but nothing like the Thrust Supersonic Car (ThrustSSC). The previous land speed record was held by the Thrust2 jet car and the same team sought to create an even faster jet-powered automobile. Using two Rolls-Royce Spey 205 turbofan engines the ThrustSSC was the first land vehicle to ever achieve speeds fast enough to break the sound barrier.

Royal Air Force pilot Andy Green was chosen as the driver for the ThrustSSC, knowing that his experience in supersonic flight would be essential to the program. In September 1997 nearly 50 years after Chuck Yeager first shattered the sound barrier in flight, Andy Green did it on land. It is truly an amazing sight to witness a land vehicle traveling faster than some fighter jets as you can see in this clip.