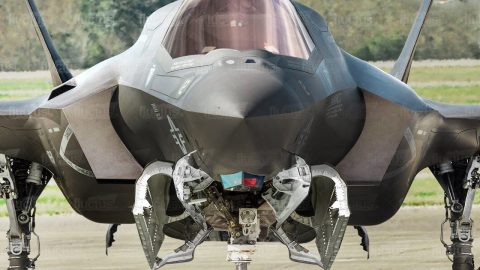 F-35s are available in three variations. These variants are made specifically for the US Navy, Air Force, and Marine Corps.

The highly-fascinating F-35 makes use of its monstrous GAU-22/A in combat. Its four-barrel GAU-22/A Gatling gun is based on an older design called the GAU-12 Equalizer with five barrels.

It is considerably lighter than the Equalizer albeit with a reduced rate of fire – around 3,300rpm. Regardless, the F-35A only carries 182 rounds while the B and C variants carry 220.

Since the RPM of the GAU-22 is around 3,300, pilots will empty out their guns in just under 4 seconds.

In the F-35A, the GAU-22 is mounted internally near the left wing root. On the F-35B and C, the gun is carried by a Terma A/S multi-mission pod mounted on the centerline of the aircraft and is shaped to reduce its radar cross-section.