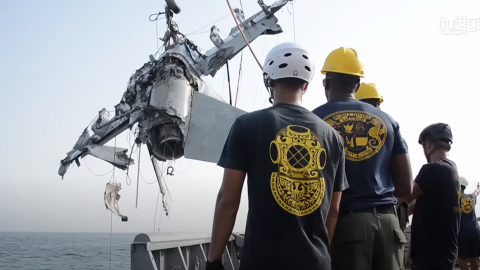 Day of the Crash

On May 12, 2015, an F/A-18F Super Hornet took off from USS Theodore Roosevelt. The aircraft and the carrier were participating in anti-Islamic State operations as part of Operation Inherent Resolve.

The Super Hornet crashed into the Arabian Sea after a severe engine malfunction in the middle of operations. Luckily, both crewmen survived the crash and were safely rescued.

Super Hornets feature classified technology and information important to the US military. The crash occurring near hostile territory made the US determined to recover the downed aircraft.

On July 22, USNC Catawba and its crew of divers and salvage specialists began the recovery mission. During its first two missions, the crew recovered the cockpit and all classified information.

With the cockpit out of the way, the crew finally got their hands on the plane’s fuselage. The salvage allowed close inspection of the engine, effectively ruling out pilot error and hostile actions.