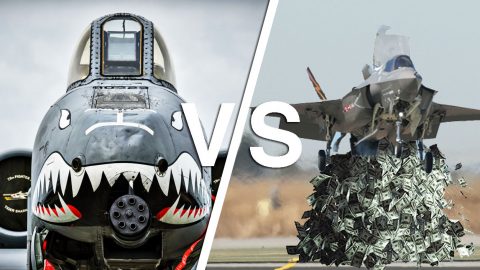 This story is a culmination of years of debating and experimentation. The basic gist of this competition and what it aims to accomplish is this. The A-10 Thunderbolt II, the military’s number one CAS (close air support) platform, is getting old and it needs to be retrofitted or replaced. The DoD’s newest aircraft, the F-35 Lighting II, is trying to fill that role. Although it was built as a stealth fighter first and foremost, one F-35 variant is supposed to have an internally hidden Gatling gun to fill the A-10’s shoes.

The F-35 is a fragile, multi-million dollar machine that needs constant maintenance and has no protection other than being stealthy. For CAS, however, the aircraft needs to loiter close to the ground where it can see the troops it’s protecting. The A-10 was designed with this in mind, which is why the pilots sit in a “titanium bathtub” for protection. The aircraft has two engines mounted high on the airframe to protect them and there is a redundant piloting system so in case the plane gets hit, it can be flown stick and rudder.

Then there are the guns.

Now, in order to make the F-35 look better during these tests (that’s a whole other story but there’s a lot of money involved here if the F-35 passes) here’s a bare-bones list of how this competition is rigged:

The sad part here is that if the F-35 is chosen to provide CAS, that mistake is going to be paid in blood. Young, American blood.

You can read the full, detailed story published by a government watchdog organization here.

Also, check out the video below to remind yourself that no matter how hard the DoD tries, they can’t replace the A-10. Even the sound it makes is enough to send insurgents running.