Utah Man Claims He Was “Wrongfully Tased” By Police 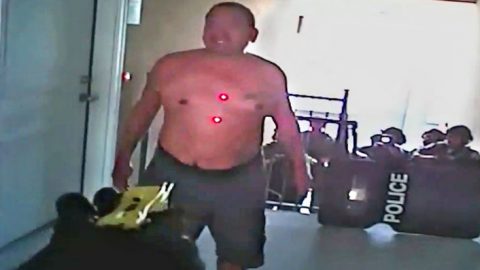 Protect and serve is the motto that police officers live by, doing what they can to keep the peace. But then the phone rings and they are ushered off to take care of another situation. When police arrive on the scene they often encounter some colorful characters who don’t always agree with their methods.

Case in point, about a dozen police officers had a run in with a man named Fernando Coronado. They were summoned to Mr. Coronado’s home after his wife put in a call for disorderly conduct. It took a while to coax Mr. Coronado from his home and even then he was a little less than cooperative. Still drunk and half-naked, he began arguing with police in an aggressive manner and ignoring their requests to stand down.

Everything comes to a head when he walked up to an officer and was promptly hit with a taser and then hit the ground even harder. After that unforgettable faceplant, Fernando Coronado is attempting to sue two West Valley City Police officers for excessive force. He claims that he was non-violent and “wrongfully tased” during the incident.

After watching the video what are your thoughts on this “wrongful” situation?