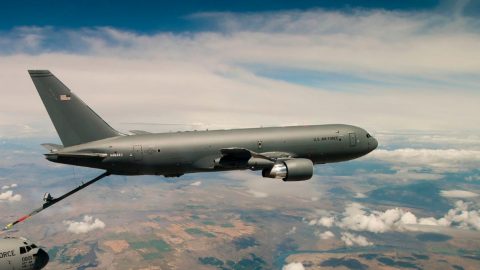 Boeing won the Air Force’s KC-X competition in 2011, earning the privilege of supplying the Air Force with a new tanker aircraft. In the years since, however, it’s been a bumpy and somewhat cringeworthy ride to get the tankers delivered.

For starters, they’re late. The entire program has been dealing with delay after delay since 2011 until finally, two years after the Air Force expected to receive a fleet of 18 KC-46A Pegasus tankers in 2017, the delivery came through in January 2019. But the delivery was quickly halted.

It’s Harder Than They Thought

The Pegasus isn’t just problematic because it  still has production issues like the refueling boom’s Remote Vision System (RVS) and axial loads. Even with those problems, the USAF was willing to accept the aircraft with the promise that Boeing will work it out.

“The Air Force has mechanisms in place to ensure Boeing meets its contractual obligations while we continue with initial operational testing and evaluation.”

News came out the aircraft was delivered and found to have trash inside of it in early March 2019. Yes, that’s right – trash.

But now the situation is even more embarrassing. The Air Force has once again halted deliveries of the KC-46 Pegasus tanker for the exact same reason. This decision was made on March 23. Yikes!

“The Air Force again halted acceptance of new KC-46 tanker aircraft as we continue to work with Boeing to ensure that every aircraft delivered meets the highest quality and safety standards. This week our inspectors identified additional foreign object debris and areas where Boeing did not meet quality standards.” -Heather Stefanek, Air Force spokeswoman

Boeing is on contract for 52 of an expected 179 tankers for the USAF.