The Crazy Stores you Can Find on US Aircraft Carriers 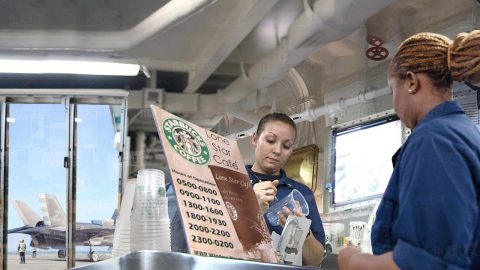 Coffee will always be a staple if you need a quick pick-me-up. Sailors aboard carriers get their cups of coffee at their own Starbucks! Their Starbucks uses the same ingredients, recipes, and preparation techniques as those back home.

If Starbucks wasn’t available on board, rest assured there will be another company providing coffee. In some instances, Seattle’s Best products are sold instead of Starbucks.

Convenience stores aboard ships mimic those on land. Clothing, toiletries, food, and drinks – you name it and the grocery store has it.

Working aboard carriers is no excuse to not have the freshest fade. Carriers can employ sailors with experience in cutting hair. Barbershops can be found on these ships and are sometimes separated by ranks.