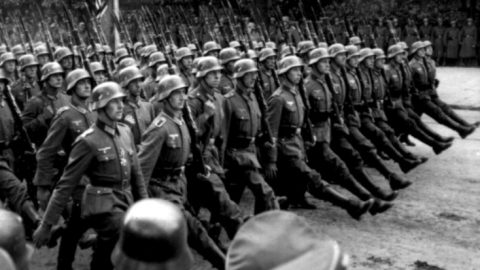 When the common man thinks of armies of Nazi Germany they can’t help but go right to countless men raising a Siel Heil and the comical goose-stepping. The high-kicking goose step has been spoofed time and time again to make fun of Nazism, but it actually served a higher purpose in combat.

Goose-stepping traces its origins to the Prussian Army in the 18th century. Officially known as Stechschritt this method of marching was used to keep military units moving at a uniform pace. It was found that if soldiers moved together at an even pace they could apply stronger pressure against their enemies, basically forming a wall. Meanwhile, the armies of other nations were staggered and difficult for their commanders to control and easily fell to goose-stepping formations.

By the time World War II came around the Goose Step was done more for ceremonial purposes rather than on the field of combat where heavy combat vehicles were more effective. However, due to its difficulty of execution, the goose step remains a strong symbol of military discipline used by over 80 countries.

The Armchair Historian takes a look at the Goose Step and other military techniques of the Prussian Army in this enlightening video.