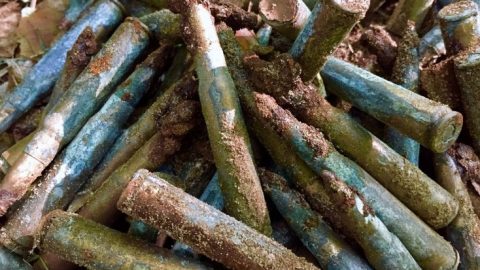 Europe saw some of the worst carnage in human history during World War II. Countless guns, bombs, bullets, planes and heavy weapons were used as the Allies battled the Axis Powers on the Eastern front. So it would make sense that a few relics of war might get lost to the test of time and discovered again.

Walking through the Eastern Front with a metal detector is just about a surefire method of finding something. There are so many lost weapons and accessories from WWII under the ground that there is a near certainty that artifacts will pop up. An underground weapons cache came on the signal of a metal detector and there was a lot more than expected.

“Apart from the rules and laws that apply to the specific areas we visit, we always make sure the environment is not damaged and that potentially dangerous and illegal finds to possess, such as unexploded ordnance, weapons or weapon parts are reported to the right authorities.”

As you can see in the video he took very delicate methods to not contaminate the environment or accidentally detonate munitions. So feast your eyes on this massive stockpile of buried weapons from World War II. There is just so much of it uncovered in this dig.