The Scary Process of Reloading Massive US Submarine Torpedoes 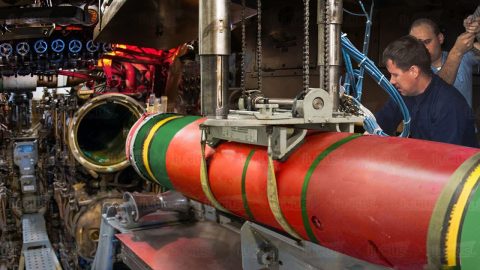 Los Angeles-class nuclear-powered attack submarines are state-of-the-art vessels that are nearly 400 feet long. They carry up to 129 sailors and a collection of missiles designed to strike land, sea, and air targets.

Among the most feared in its arsenal of weapons is the UGM-84 Harpoon missile. In the video, the sailors of the USS Olympia prepare to launch it during RIMPAC, a multinational exercise off the coast of Hawaii.

Handling such sensitive and powerful weapons requires a lot of coordination among its crew members. The Harpoon alone weighs about 1,500 lbs with a warhead capable of sinking the largest naval vessels available.

The crew performs last-minute preparations before the missile is guided into the torpedo tube. Afterward, the loading machinery is removed to close and seal the tube.

At this point, the Harpoon is ready and waiting for the bridge to signal the launch.