These 2 Female Astronauts Are About To Make Historic Spacewalk 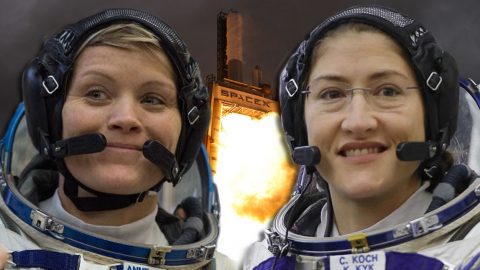 For the first time in history, NASA will send two female astronauts from the international space station to perform a spacewalk. Anne McClain and Christina Koch are scheduled to venture outside of the ISS on March 29th, 2019 as part of NASA’s Expedition 59.

Earth’s 3rd day started with getting the blood (plasma?) pumping! First the treadmill, then weights – he even got some deadlifts in with me. It is important to exercise every day, not just for our muscles but also to protect our bones from losing density in microgravity. pic.twitter.com/gIsiKt4K8S

These are clearly not the first females to go into space. The key difference here is that the all-female crew will be performing a spacewalk. Officially called “Extravehicular Activity,” or “EVA,” for short, a spacewalk is defined as “any activity done by an astronaut or cosmonaut outside a spacecraft beyond the Earth’s appreciable atmosphere.”

The first all-female space walk at the International Space Station is scheduled just in time for #WomensHistoryMonth.

The very first spacewalk took place on March 18th, 1965 and was done by then Soviet cosmonaut Alexey Leonov who left his vehicle attached only by a tether and exposed himself to the vacuum of space.

“It was not orchestrated to be this way; these spacewalks were originally scheduled to take place in the fall,” said Stephanie Schierholz, the Human Exploration and Operations Mission Directorate, clarifying the spacewalk was not intentionally made to make a historic event.

NASA did not confirm any specific reasons for the spacewalk of these female astronauts. Typically, they are held to either work on fixing something outside of the spacecraft or to conduct scientific experiments.