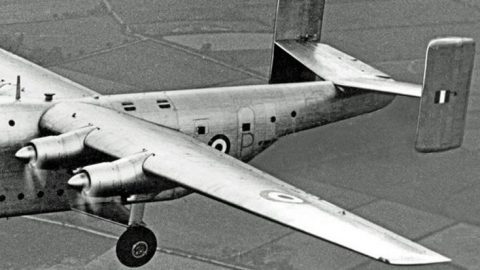 Following the end of WWII, the world of aviation was thrust forward into the Jet Age. This time was a gigantic leap forward in innovative design and style for aircraft of all sorts. However, not every plane got the same treatment of the Jet Age and the Blackburn Beverley is a perfect example of that.

Designed in the 1950s General Aircraft, the GAL.60 Universal Freighter was the final plane they would make before being absorbed into Blackburn Aircraft Limited. This cargo freighter was completed by 1955 and later rebranded as the Blackburn Beverley to serve the Royal Air Force. Early designs of the Beverley very functional aircraft in flight but had difficulties on the ground especially during the loading process. Additional funding was provided to Blackburn from the Churchill administration and the Beverley achieved a full reconfiguration that allowed it to operate successfully on the ground and in the air.

The Beverley could transport up to 94 troops and achieve lift with 31 tons of cargo using its Rolls-Royce RB168-1A Spey Engines. 49 units were produced of the Blackburn Beverley and many claim that it was comparable to the C-130 in terms of functionality. It served the Royal Air Force until 1967 when other cargo freighters became better suited for its role.