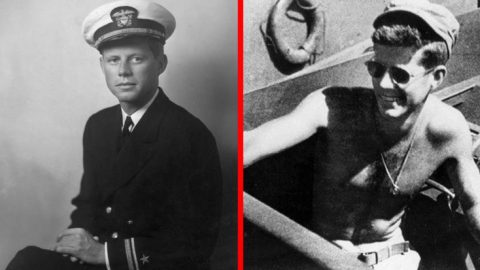 John F. Kennedy’s time as President is known by many people around the world, but fewer people know of his time in WWII. JFK served as Combat Officer in the US Navy in the Pacific Theater of War. He saw a fair share of combat against the Japanese but there is one story among others that made him a hero.

In the early 1940s, a young John F. Kennedy had graduated from Harvard University and was pursuing a graduate degree at Stanford. He cut his schooling short after the attack on Pearl Harbor and joined the United States Navy to fight against the forces of Imperial Japan in the Pacific. There he would become a crewman aboard the vessel PT-109 and face his greatest challenge of the war.

In August of 1943 when the crew of PT-109 was planning attacks on the enemy, a Japanese destroyer rammed their ship. Their boat was destroyed and it was three miles to the nearest island. Despite a terrible situation, Kennedy was prepared for it thanks to his time on the Harvard swim team. He took some rope and quickly tied it to a crewman who was too badly injured to move and swam for miles hauling him.

“[I]t was involuntary, they sank my boat.”

They eventually reached an island where they remained for nearly a week before being rescued. John F. Kennedy was awarded the Purple Heart and the Marine Corps Medal for his courage in a desperate situation.

The video below shows a more detailed look at the story that made John F. Kennedy a hero long before he would become one of the most iconic presidents of the United States.