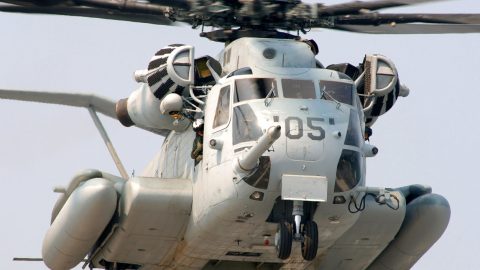 By the look of this footage, it looks like it’s been ripped from a VHS tape (you younger folks are probably baffled at what that even means) and uploaded to YouTube over a decade ago. Since then it accrued over 1 million views, and rightfully so. Seeing a helicopter this size do a such an aggressive takeoff is a sight to behold.

The YouTube uploader by the name of jts11 responded to a comment from one of the people who saw his video saying:

This was in response to another YouTuber saying his dad was in the middle seat of that CH-53 when it took off. As an added validation for the takeoff, however, hearing a guy who’s flown these birds for over a decade say this was impressive to him says a lot.

Think about it though. These are the largest military helicopters the United States operates. They are almost 25 feet tall, 88 feet long and weigh 23,628 pounds empty. That’s a lot of weight to pitch forward like that.

One thing’s for sure. If we needed to be inserted or extracted from a battlefield, we’d choose this crew any day of the week.