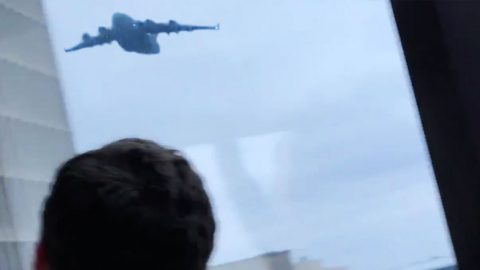 At approximately 1 p.m. CST, a low flying C-17 Globemaster III startled many residents of Nashville, Tennessee. Flying very low over tall buildings around the city, the massive military cargo aircraft circled above a few times before disappearing out of sight.

Flybys like that are not at all common in the area, which is why folks, especially those working in high rise buildings, felt uncomfortable if not outright terrified.

Mallory Riggins who works in one such building posted two videos on Twitter and as you’ll be able to hear, the responses around the office seemed quite uniform.

In her next post, you can clearly hear people contemplating leaving their workstations to get to lower ground.

Plane circling downtown Nashville. Dangerously close to all building. What is going on??? @FOXNashville pic.twitter.com/R7kA6ugDqW

We tracked down news stations around Nashville and they’ve put people minds at ease when they caught on people were legitimately scared.

Nashville Flyby: According to the Air Traffic Control Tower at Nashville International Airport, the plane is conducting a training exercise for Gov. Bill Lee’s inauguration.

Others, particularly aviation fans, didn’t share the same sentiment. One Twitter user called the flyover a military “treat,” while capturing video from the passenger side of a car.

According to verified reports, Gov. Bill Lee’s inauguration which is scheduled for Saturday, January 19th, 2018, was to begin with a flypast of a military aircraft. The crew was only doing a dry run before the event, something the nearby military base put on the books with the ATC.