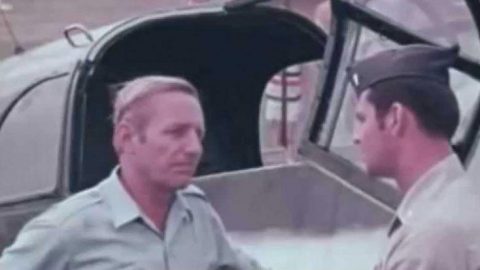 With 352 aerial victories under his belt, Erich Hartmann is known as the greatest ace pilot of World War II. Hartman flying over 1,400 combat missions and bestowed the title of The Black Devil by the Russians. In his Messerschmitt Bf 109, few enemies could provide a challenge the to the legendary pilot.

Hartmann learned not to fear Russian pilots but he had a greater respect for Americans due to their superior technology. During his time in the Luftwaffe, Hartman was able to achieve 11 honors including the Diamonds to his Knight’s Cross. Erich Hartman placed a greater emphasis on the abilities of a pilot rather than the plane they were flying.

“And we shouldn’t say today this type of aircraft is better than the other one. It depends what kind of pilot is sitting in it.”

Interviews with Hartman are rare, in this footage we hear testimony from his time in the war. Erich Hartmann speaks of techniques that made him the top pilot of WWII and his decade in a Russian prison. It is very informative to hear about what he calls “a lost life.”