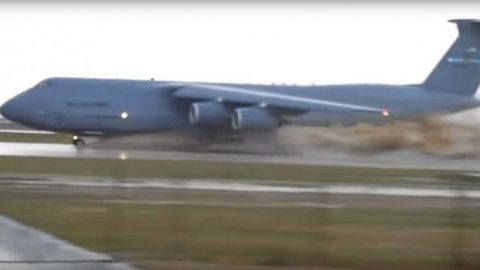 The Lockheed C-5 Galaxy is one of the biggest aircraft in the world and has been a mainstay of the United States Air Force since 1969. With a length of 247 feet and a wingspan of 222 feet, this huge plane has served the U.S. Military in every major conflict since the Vietnam War. Although it is not suited for combat the Galaxy’s greatest trait is aiding military operations with its ability to transport massive amounts of cargo and military vehicles.

“As the Air Force’s largest and only strategic airlifter, the C-5 Galaxy can carry more cargo farther distances than any other aircraft. With a payload of six Mine Resistant Ambush Protected vehicles (MRAPs) or up to five helicopters, the C-5 can haul twice as much cargo as any other airlifter.”

In the video that follows we see a gigantic C-5 Galaxy taking to the runway and hitting the deep water as it attempts a takeoff. The footage is less than a minute in length but the tension is felt the entire time as we learn exactly what happens when a large aircraft encounters that amount of water.

We’ve actually spoken with one of the mechanics that maintained this particular plane and we found out something pretty surprising. When it landed, two of the wheel flaps were completely ripped off. Also, they had to fix a bunch of the paneling on the belly of the plane. You might think it’s JUST water, but at that speed and with that many gallons, it becomes quite dangerous.