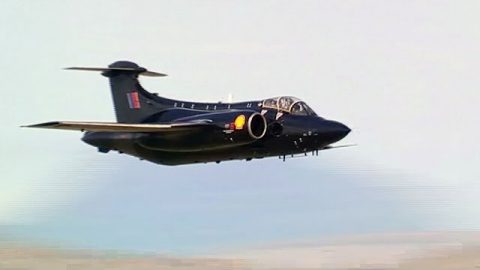 Bang For Your Bucc!

The Blackburn Buccaneer is an absolute masterpiece of an aircraft. Debuting in 1962 the Buccaneer has a sleek frame, has great visibility as well as agility and a heavy payload. Despite its heavy armor plating, this jet is incredibly fast allowing it to make precise attacks. It enters at low altitude under enemy radar dropping a nuclear weapon and escapes before detonation in under a minute.

“The Blackburn Buccaneer S.2 was a two-seat, low-level, strike and reconnaissance aircraft of all-metal, stressed-skin construction, powered by two Rolls-Royce RB Spey Mk.101 turbofans, delivering 11,100 lb thrust. It had a maximum speed at sea level of 690 mph (Mach 0.92), a tactical radius of 500-600 miles and a range of 2000 miles.”

The Blackburn Buccaneer is one of the rarest bombers around with only 211 units in existence. One Buccaneer found its way into the hands of Ian Pringle who transported it to Thunder City in South Africa. Pringle moved the plane there because it is one of the few places that allows civilians to pilot nuclear bombers.

“This aircraft still today out-performs a lot of frontline aircraft in the Air Forces. It’s a fantastic aircraft, it’s a challenge and the more I fly it, the more I love it.”

See Ian flying the nuclear bomber barely about the ground in this clip from Tycoon Toys.