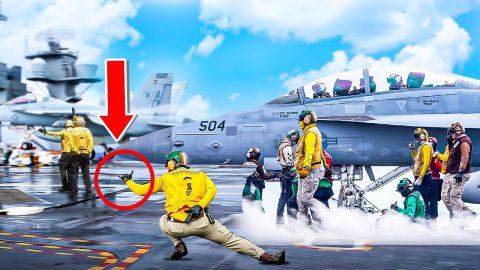 Operations on carrier decks are considered to be very dangerous. Anyone who plays a role on the deck will always practice proper safety standards, whether they’re a pilot or a catapult officer.

During takeoffs, “final checkers” give the aircraft the final once-over before launch. They’ll raise a thumb to signal the Catapult Officer if the plane is good to go and the catapult track is clear.

The “checkers” pretty much do what their name suggests. They quickly look for any hydraulic leaks, fuel leaks, or other visible problems before the aircraft gets to the catapult.

Those wearing yellow vests are “Shooters” who signal the cat crew to fire the catapult. Meanwhile, cat crew members wear green vests and are tasked to wait and fire the plane placed on the cat.

In jobs like this, proper placement is important. The checkers are parallel to the jet on the flight deck to avoid the plane’s trajectory.