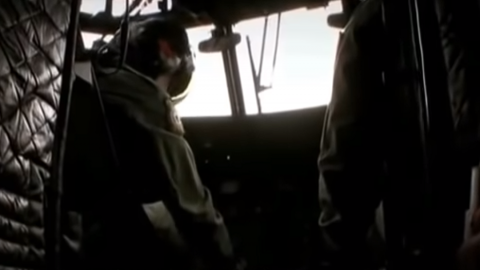 While on service in Afghanistan, a Chinook called “Bravo November” was piloted by Flight Lieutenant Ian Fortune. The crew was tasked to extract injured soldiers from the battlefield.

During the extraction, the Chinook landed in a “hot zone” surrounded by Taliban forces. Its fuselage was hit many times – and so was the cockpit. Unfortunately, the pilot was hit by a bullet.

Hit On The Head

One bullet ricocheted and hit Ian Fortune. Luckily for him, the ricochet hit his helmet at the attaching point for the night vision goggles, resulting in a smashed visor.

Unfazed By The Bullet

With blood trickling down his face, the pilot calmly took control of the aircraft and continued to land the damaged helicopter like it was nothing.

Flt Lt Ian Fortune was awarded the Distinguished Flying Cross for his service. Not a lot of people can tell you they survived a shot in the head, but Fortune can.