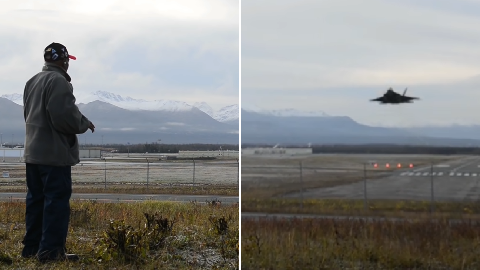 Staff Sergeant Leslie Edwards Jr. was drafted in 1943 into the Army Air Corp and was sent to Sheppard Field for his basic training. He’s a member of the legendary Tuskegee Airmen – the famed group of African-American military pilots during World War II. On October 14, 2017, he inspected the F-22 at Joint Base Elmendorf-Richardson, Alaska along with Tech. Sgt. Jeremiah Frye.

And the excitement on his face said it all. He commented, “Yes, we have made progress! That is clear to me.”

Staff Sergeant Leslie Edwards Jr. passed away on October 4, 2019 at the Cincinnati VA Medical Center in Corryville, Cincinnati. He was 95 years old.