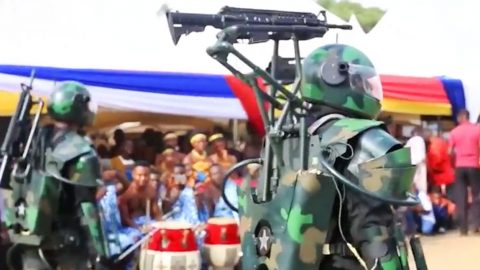 According to numerous media outlets and plenty of video footage to back it up, Ghana held a military parade On January 2nd, 2019.  Thousands of people gathered to see the newest technology, men in what seemingly appear to be exoskeleton suits and a brand new APC (armored personnel carrier) made their way down the main street of Accra, the nation’s capital.

What seemed odd about the whole ordeal is, well,  basically everything. Even a person with a vague understanding of the military, tactics or equipment could tell these “prototypes” are downright silly.

The exoskeleton suits limited the soldiers’ mobility to a point of almost walking like geishas. The headgear looked like poorly spraypainted motorcycle helmets with protruding antennas and then there were the “Ironman” looking guns in the back. The problem is that they look like the only function they could perform is shoot the wearer in the back of the head.  As you’ll notice in the video below, one of the “hydraulic” hoses was just tangling freely off a soldier’s leg clearly not really helping him walk.

Then there’s the ATC. Bulky and slow, it could take hours to pick it apart in terms of tactical effectiveness but let’s take a look at the big flaws. The back gate has stairs, not a ramp, just throwing another hurdle at the exoskeleton wearing soldiers that already have low mobility. The ramp itself takes about a minute to lower itself making sure that your squad is exposed to enemy fire as long as possible. Once in, however, the soldiers can enjoy beige leather seats so at least they’ll be comfortable.

We also got our hands on a picture of their vertical tank thing although we couldn’t find any footage of whether or on not it even moves. You can see it below.

Here’s a video of what that whole ordeal looked like. It’s 10 minutes long so feel free to skip around but make sure you hit all the major closeups. They’re bizarre to say the least.