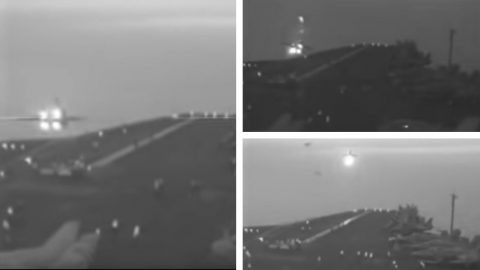 On March 8th, 2002, just a few years before they were retired, an F-14 crew found itself in a really dangerous situation. Upon landing on a carrier called USS John C. Stennis, the tail hook of the F-14 broke off sending the plane and the crew off the deck.

There are two videos of the incident below. One is low at the bottom of the flight deck clearly showing the tail hook breaking off and hurling toward the camera. The other shows the incident from the bridge and the plane coming off the deck again.

As far as we know, both pilots were rescued shortly after the ejection and survived. They were not grounded as they did exactly what they were trained to do, despite the outcome.

What happened is the F-14 lost a couple of hundred pounds after crew, their chairs and canopy departed from the aircraft, making it lighter hence it flying away by itself.

View From The Bridge

View From The Flight Deck