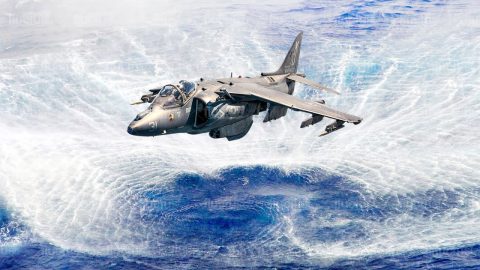 Possible But Not Recommendable

Harriers are able to rotate their nozzles at any speed for “VIFFing”. VIFF stands for Vectoring in Forward Flight, which is a maneuver that allows faster turning and braking to theoretically evade enemies despite the Harrier’s high wing loading.

While the concept of the VIFF works aerodynamically, it simply isn’t used for battle. In one exercise back in the 80s, a Harrier who VIFF’d was noted to be too slow and helpless, making it an easy target. For now, VIFFing is exclusively an airshow thing for Harrier pilots.

Ospreys, like the Harriers, also have a trick up their sleeves – albeit not as exciting. An Osprey’s wings can turn and be parallel with the fuselage. Having this feature makes it easier for Ospreys to be stored in carriers.