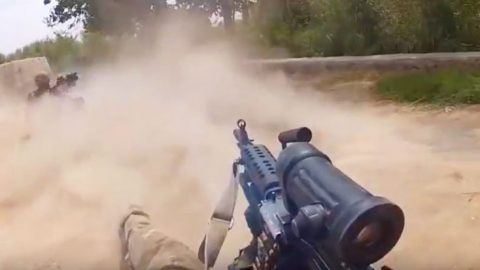 The life of a soldier is never an easy one because every minute you are on duty could be the last minute of your life. As a soldier, you hope for the best but you always prepare for the worst knowing that every environment may not be the most welcoming. A US Army Patrol found this out the hard way when they were suddenly ambushed by terrorists and a helmet camera captured the whole thing.

The Panjwai District of Afghanistan is a hotbed of terrorist activity and many consider it to be the spiritual home of the Taliban. Needless to say, American troops are not always welcomed into the territory with open arms. Americans more than often experience the terrorists taking arms against their presence and they must hold their ground.

Terrorists attack the patrol and instantaneously they spring into action to counter the threat. Bullets start coming out from the trees, terrorists hiding from the counter-attack but things heat up in the conflict. This gunfight is not pretty but it definitely shows how heroic these soldiers are under the most intense pressure. The video of the terrorist sneak attack can be viewed in this link and it is pretty damn intense.