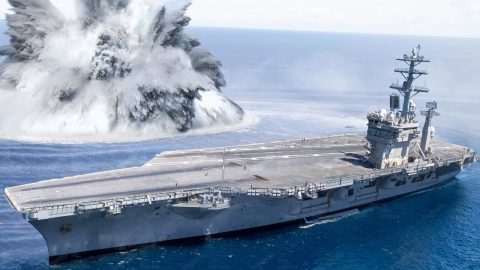 Like any other important US ship, the Gerald R Ford had to undergo full ship shock trials (FSSTs) to validate its shock hardness and ability to sustain operations in a simulated combat environment.

In these trials, 40,000lbs of heavy explosives are detonated near the carrier. Each subsequent test moves the explosives closer and closer to the ship. The Navy isn’t playing around with these explosions either – these are classified as 3.9 magnitude earthquakes by the US Geological Survey.

The carrier successfully completed its shock trial tests in August 2021. Ford’s Commanding Officer, Capt. Paul Lanzilotta told reporters they experienced zero catastrophic failures, flooding, or fire aboard the ship. In addition, helicopters could land within minutes of the detonation, and other assets could move around the deck.