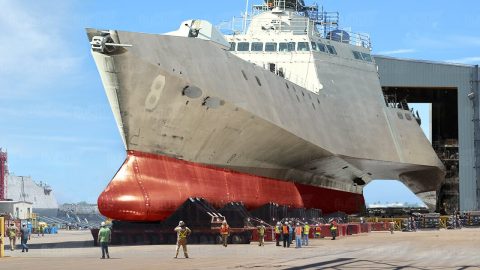 During the early 2000s, the US Navy started a program to create a group of ships mainly operating in areas near the shore. This soon led to the introduction of “Littoral Combat Ships,” which are fast, agile, stealthy, and versatile vessels.

One of the first iterations of these ships was the Independence-class made by General Dynamics – with Lockheed Martin’s Freedom-class coming right after.

However, it didn’t take long for the project’s initial success to falter due to cost overruns and performance issues. Most importantly, the promise of its versatility amounted to nothing as its modular mission packages never really materialized.

These reasons led to the Navy decommissioning some of their Independence and Freedom-class littoral combat ships. In the end, they concluded that it would be cheaper and wiser to decommission the vessels than upgrade them to match their current standards.