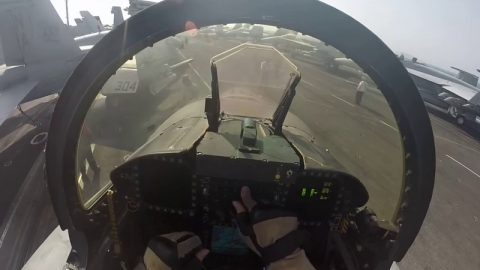 The video starts with the pilot walking toward the Plane Captain. She then notifies him that they have taken out all the safety pins and that the APU and break pressures are suitable. After the briefing, he performs a final inspection of the aircraft before climbing the ladder.

While on top, the pilot inserts his maintenance and mission data cards and then straps himself in after connecting the oxygen supply. He then attaches the leg restraints, which pull the pilot’s legs in during ejections.

Afterward, the pilot signals to start the APU by forming a “three” with his finger. He then counts to “two” to start the right engine before starting the left. When he gets all the required instruments online, he makes the final checks on the flight controls until he’s ready to go.