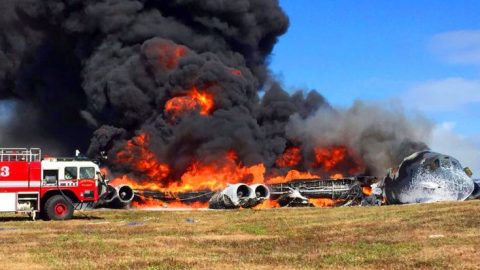 On May 19th, 2016 a B-52H Stratofortress took off for a routine training mission crashed on Andersen Air Force Base in Guam. No members of the B-52H’s crew were killed but the massive bomber went up in flames. For nearly a year the cause of the crash was unknown as investigators looked for the reason, but now a breakthrough has been made.

The cause of the 5th Bomb Wing’s 69th Expeditionary Bomb Squadron B-52H’s crash during takeoff has been determined to an unlikely subject, birds. This is hardly the first time that bird related activity has downed a large plane.

“Accident Investigation Board found the cause of the mishap on May 19 was that the pilot spotted bird activity and perceived cockpit indications as a loss of thrust, and subsequently applied abort procedures. Drag chute failure and exceeding brake-energy limits also contributed to the mishap.”

The crash of a $112 million bomber comes as a major loss, but birdstrikes are an ongoing threat to aviators. Fortunately, there were no lives lost but pilots must remain alert that anything can happen.