USAF Reveals How Many F-22s Were Damaged By Hurricane Michael 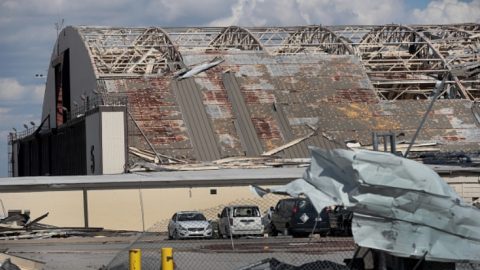 Tyndall Air Force Base took a direct hit from Hurricane Michael as it devastated the Southeast United States. The staff successfully evacuated the base but not everything could be taken out on time. No lives were lost during the hurricane but not all of the aircraft were taken to safety, now the US Air Force is assessing the damage.

“No one got killed, and no one got hurt. You’ll see what my base looks like. But my people are good. I can fix things. I can’t fix people.”

There were several structures that were torn apart by Hurricane Michael and many of the aircraft housed in them took the hits. Tyndall Air Force Base is home to 55 F-22 Raptors and the USAF has reported that 17 of them were were left behind to ride out the hurricane and all of them were damaged.

I updated the post with some of the images showing F-22s inside damaged hangars on base. Two sources have said 17 F-22s were still there, but I cannot confirm this and there could be confusion with other aircraft, but it would not surprise me either. https://t.co/JikiO65eny

Images of an overturned F-15 from nearby Veteran’s Park circulated around the internet. Officials claim that it will take years before normal operations resume at Tyndall Air Force Base. Despite the damage, the US Air Force is confident that the F-22s will be restored to flying condition.

“All of the F-22s from Tyndall will fly again. As an update, we began moving some F-22s from Tyndall to Langley this week. Additionally, aircraft maintainers are on-station repairing other F-22s that received minor damage and assessing a few others that may require additional engineering support and analysis before they return to flight status.”

The extent of the damage at Tyndall Air Force Base can be seen this in flyover video.