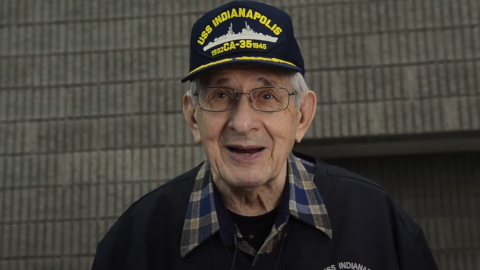 You probably already know about the devastating WWII event in which the USS Indianapolis was torpedoed and only a few hundred sailors and Marines survived. And you might have seen Edgar Harrell telling his story over the years online. Well, heart-breaking news today as the WWII veteran hero has passed away at the age of 96.

The USS Indianapolis was a cruiser with 1197 crewmen when a Japanese submarine commanded by Hoshimoto fired a total of 6 torpedoes in which 2 hit their mark and the entire ship went down within just 12 minutes. Over 900 were in the water and ultimately only 316 crew survived, but the horrific stories of what happened to the men as they were stranded such as sharks, hypothermia, and everything, is unreal.

It’s worth a listen. Check it out from the man himself.