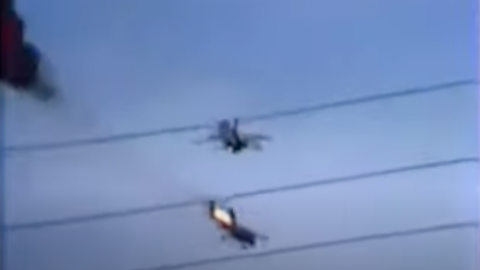 This OV-10 Bronco never stood a chance against this F-16. Realistically, what would the Bronco even do against a 20mm M61A1 Vulcan Gatling gun?

The pilot of the Bronco probably reached for the ejection manual when he saw the F-16 fly close to him. A light armored, reconnaissance aircraft will definitely find it considerably hard to fight a multirole fighter plane.

According to reports, the pilot of the OV-10 ejected and landed safely. He was later arrested and sent to prison. The man was apparently part of the coup attempt in 1992.

Broncos were heavily used by the Chavez loyalists to drop bombs and launch rockets aimed at government buildings. Four Broncos were destroyed during the coup attempt.