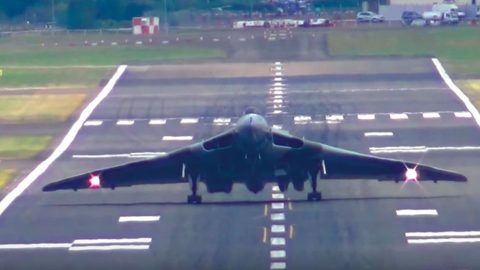 We’re not sure what’s more spectacular. The pilot holding the nose up for so long after touching down or the Vulcan itself. Maybe it a combination of both.

We’re not sure how this transpired, but during an airshow, the pilot of a Vulcan did a nice long wheelie for almost half of the runway. Alth0ugh it’s nothing out of the ordinary, but it does look spectacular. Especially when it’s a delta wing monster like the Vulcan.

For those of you who don’t know what this plane is, we’ll give you a quick rundown. These majestic looking planes were built by the United Kingdom and served as high altitude strategic bombers capable of nuclear bomb drops. 136 of them were built since 1952 and were officially retired from the Royal Air Force in 1984.

This particular Vulcan you’ll see in the video is the last airworthy example of this plane, but her caretakers have been struggling for years to keep her that way. Because she’s so old, the many stresses of flight had her grounded for a while until more funding was acquired. From donors and volunteers, many fought hard to keep her airworthy but our research indicates that this year will be her last in flight.

Hopefully, someone will devise another strategy to keep her in the air a little while longer.