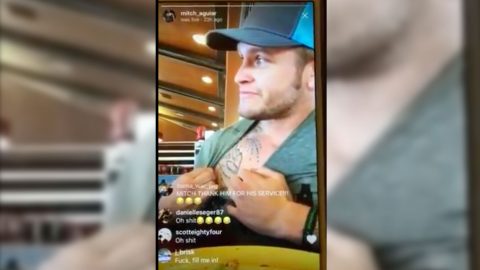 The Stolen Valor Act was signed into law on January 15th, 2013 by President Barack Obama. The law mandates that it is a crime to ” fraudulently claim having received a valor award specified in the Act, with the intention of obtaining money, property, or other tangible benefit by convincing another that he or she received the award.” The reason that such a law was necessary is because people were doing it for decades and believe it or not, still do it today despite this law.

Certain folks walk around this world claiming to have been this or that in the military, many of them creating exuberant stories to back up their claims. Navy SEALs are a fakers favorite claim because many people know about them. In books and movies, they’re always out on top-secret missions, making them easy to impersonate. When you challenge a claim, for example, one of these fakers will simply say, “can’t tell ya. It’s classified,” when they get stumped.

Because the video below was recoreded live at the time and a few seats over from the imposter, it might be a bit hard to hear the conversation at times but stick through it unitl the end. It’s definitely worth it.

One such guy (of whom we have a video of below) had the unfortunate luck to be sitting two seats over from an active Navy SEAL. The SEAL, Mitch Agular, started prying into the man’s claims while on Instagram Live mind you, the end being the most epic shutdown of all time.