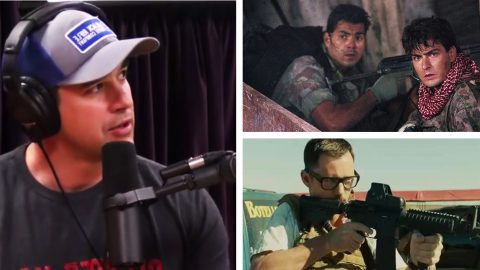 We’re all war buffs around here, and when we watch movies we typically can spot some things movies get wrong. From the wrong aircraft being used for missions to out of whack tactics that’d get you killed immediately in real life, we’ve all seen them.

Now, imagine being a highly trained Navy SEAL like Andy Stumpf in the clip below and being able to spot most, if not all, the mistakes in movies. As he says it in the interview below, ” Turn that sh*t off. I can’t watch this,” and that’s no way to live. Movies are supposed to be entertaining, but when you view them with a trained eye (putting yourself into situations that you’ve been in real life), you just can’t overlook them because it hits too close to home.

He knows that Hollywood is Hollywood and it’s their job to sell tickets to the movie theater. It’s just the way things are.

For him though, he’d rather just watch none war-related movies so he doesn’t get pissed off. Check out the interview below. We’re sure you’ll find it pretty relatable.