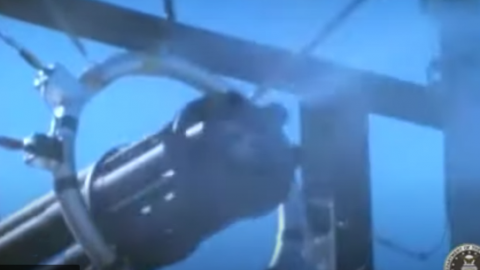 The B-52 Superfortress has been around for a long, long time. Its first flight took place just 7 years after World War II in 1952 and they have been flying for the U.S. ever since.

It’s not the same exact aircraft today as you can imagine, as their avionics, COMs and electronics have been updated to today’s standards, but the airframe is still the same one as it was over 50 years ago for the most part.

One modification that B-52s went through that they don’t have currently is a tail gun and not many people know about it. Keeping true to Boeing’s predecessors like the B-17 Flying Fortress and B-29 Superfortress, a tail gun was installed in the B-52H variant as a countermeasure for incoming rockets in the 60s.

The weapon of choice was the M61 Vulcan. It was a 6-barrel Gatling-style rotary cannon capable of shooting up to 6,000 rounds per minute. It was used in many aircraft over the years including the F-4 Phantom II, F-14 Tomcat, F-18-Hornet as well as many others.

You can see it tested in the vintage footage below.