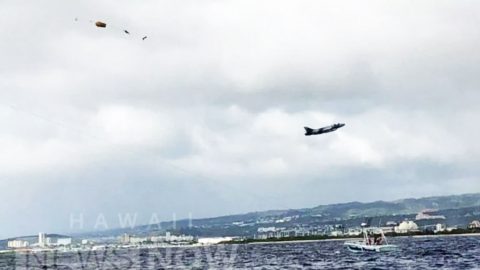 On Wednesday, December 12th, 2018, a pilot of a Hawker Hunter jet was forced to eject for unknown reasons while over Hawaii waters. He was taking part in the Sentry Aloha war games, a series of fighter exercises hosted by the Hawaii Air National Guard’s 154th Wing.

At about 2:30 p.m. P.S.T, the jet went down off the coast of Honolulu and was captured on camera by the many boaters who were watching the exercise. Many captured the aircraft as it was taking a nosedive into the water below, then seeing a small dot eject away from the aircraft and a parachute deploying.

A nearby boater, Mack Lander, sailed over to where he saw the pilot hit the water and jumped in to check on him. Untangling him from his parachute, he asked him if he was alright and was told his back hurt from the decompression. Lander then pulled the pilot onto his boat.

WATCH: Video shows the moment a fighter jet slammed into the Pacific Ocean off the coast of Hawaii Wednesday; the pilot was able to safely eject himself seconds before the crash. https://t.co/MHRpcA9sxT pic.twitter.com/gyM38NDLEI

The pilot was identified as Matt Pothier, 47. He is a civilian pilot who for unknown reasons right now was piloting the vintage jet aircraft and was taken to the hospital in serious condition. Later in the day, the hospital released a statement saying he had non-life-threatening injuries.

The crash is now under investigation.