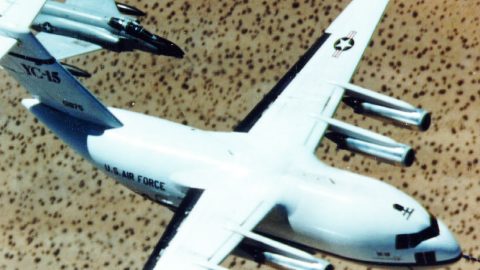 Every single aircraft you see in the air today is a result of prototypes that looked funky, failed or were a combination of both. As the short clip below will explain, McDonnell Douglass was trying to experiment with new types of flap configurations to built a medium STOL transport aircraft and although it wasn’t a success, it gave way to one of the most used military transport aircraft the U.S. has, namely, the C-17 Globemaster III.

As with any government competition, the U.S. Air Force sent out a spec sheet. In the 1970s they were looking to replace the C-130 Hercules with an aircraft that can perform better STOL (short takeoff and landing) and have further range, payload, and overall performance.

Boeing came out with their YC-14  while McDonnell Douglas proposed the YC-15 of which we have a video below. After all was said and done, the DoD chose the YC-15 as the winner but with modifications many modifications.

They gave their prototype a new wing shape as they increased the size of the fuselage and also added more powerful engines. This design was re-designated C-17 and was a good mix between the C-130 Hercules and C-5 Galaxy. Full production started in 1991 and until now, 279 of them were produced.