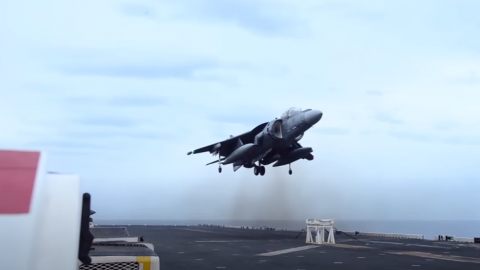 No Room For Error

USMC Captain William Mahoney had quite a daring adventure on June 7, 2014, aboard USS Bataan. Minutes after launching from the flight deck, Mahoney realized he had a malfunctioning landing gear.

Mahoney immediately slowed down the aircraft and hovered above the ship. While hovering, he was assisted by another jet pilot at the tower walking him through the situation.

The pilot determined that Mahoney’s nose gear didn’t come back down – giving him two options: ditch it at sea or attempt a risky, unprecedented landing. Of course, Mahoney decided to land the $20 million aircraft.

Crew members quickly set up a crash cradle and placed it exactly where the nose gear would have been. He started his descent at 300ft until he successfully landed his Harrier on the deck.