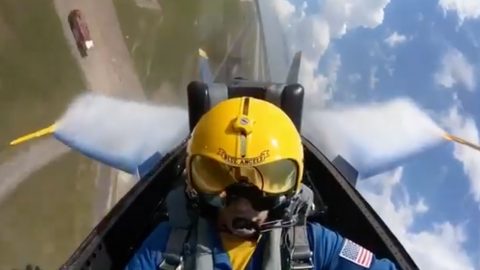 Everyone who knows even a bit about aviation knows who the Blue Angels are. They’re the best our military has to offer in terms of flying having to pass rigorous Naval aviator tests to even be considered. Then, they train even more to perform some of the tightest formations the world has ever seen.

Not until just recently, however, were we able to really see what it’s like to fly in one of their jets. With new technologies making cameras smaller and more detailed over the past decade, we can now see footage that makes us feel like we’re along for the ride.

The video below is one such example.

A Navy Blue Angel, probably #6 because only #s 5 and 6 do sneak flybys, had a camera on his HUD when he was making a low and fast flyby. Getting to a mere couple hundred feet, you can clearly see houses, trees and roads.

This view and distance really makes you see just how fast “near” the speed of sound looks like. When you’re doing 750 mph in the sky you have no reference points. When you’re that low, the feel of the speed really comes through.

This is ABSOLUTELY FANTASTIC Doc!! @navyblueangeldoc・・・Traveling at just under the speed of sound, the Sneak Pass is our demonstration’s fastest maneuver. The view from the backseat is unique – it is tough to comprehend how fast the ground is moving past when you are only 60 feet above it. Here, LCDR Tyler Davies begins the maneuver by turning in from 5 miles, selecting full afterburner, and descending while accelerating to 0.95 Mach on the show line. As we approach the centerpoint LCDR Davies calls his speed out at 1-mile intervals….#blueangels #sneak #navy #gopro #aerialphotography #avgeek #instagramaviation #aviation #pensacola #florida @pilotstuff @lvjackpilot @combat_learjet #military #combatlearjet