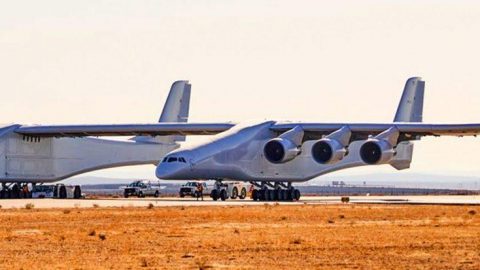 Boasting a wingspan longer than a football field, the Stratolaunch is the world’s biggest aircraft. There have been a few doubts, hiccups and naysayers that said that this jet wouldn’t work. However, those voices have been silenced again as the Stratolaunch achieved a new top speed in preparation for its first flight.

The most recent taxi tests allowed Stratolaunch to achieve speeds of 80 mph, edging closer to its actual flight. The main goal of the jet is is take satellites into orbit, which could be possible as early as 2020.

“Successful performance this week by our majestic Stratolaunch aircraft. Meeting all test objectives at 25, 40, 55, and 70 knots. Thanks to all team members for such an incredible week.”

We are deeply saddened about the passing of our founder, Paul G. Allen. He was a visionary who inspired us all to dream big. pic.twitter.com/5S1Dy1FY6P

Every small step counts towards bringing the Stratolaunch program to life and a new top speed is crucial towards success. A film of the world’s biggest plane conducting speed tests can be viewed in this clip from Stratolaunch.