Why Did The Soviet Union Conceal Their Most Effective Weapons During The Korean War? 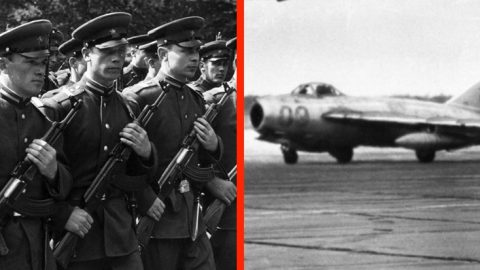 (Photo by Sovfoto/UIG via Getty Images)

In the early 1950s, the Soviet Union and the United States were deadlocked in the Cold War trying out outdo one another in terms of technology. Aside from nuclear weapons, the Soviet Union had two key advantages the MiG-15 and the AK-47. However, they made the decision to keep these weapons secret, why is that?

Concealing a secret weapon creates a tactical advantage over enemies with the element of surprise. But, when an enemy knows about a weapon they can learn its secrets and imitate it. The Soviet Union knew this and took measures to prevent access to these weapons during the Korean War.

When the US Air Force first encountered the MiG-15, it completely outclassed anything that had in their arsenal. Even the F-104 Starfighter couldn’t keep up with their speed. B-29s in the Korean War were easy prey to MiG-15s. Small groups of fighters once took down 6 Superfortresses in a single battle.

However, these combat encounters were directly from Soviet pilots but the United States was not ware. The Soviet Union did not want a direct conflict with the United States escalating into World War III. To avoid detection, these MiG-15s were painted with Chinese colors and Soviet Pilots were dressed in Chinese gear.

Meanwhile, the AK-47 was still in its infancy during the Korean War but did not see combat. Designed by Mikhail Kalashnikov shortly after WWII, he set out to create a weapon to protect the Soviet Union. His personal experiences during WWII demonstrated the problems with Soviet firearms and the AK-47 corrected them.

Although it may have made a difference in the hands of Chinese and North Korean soldiers, the Soviet Union was not willing to allow it in the hands of foreign nations just yet. They were willing to provide fighter support, but their new gun was deemed too valuable.

Unfortunately, for the AK-47, it became a victim of their own success and spawned a horde of imitators. In fact, it became the AK-47 became the most reliable and widely circulated weapon on the planet. Inevitably, it fell into the hands of enemies of the Soviet Union and terrorists.

“I sleep well. It’s the politicians, who are to blame for failing to come to an agreement and resorting to violence.”

The Soviet Union did their best to keep these weapons out of warzones to prevent by their enemies something so effective can only remain a secret for so long. This video from Simple History gives a great look at the Korean War.