Did You Know That Russia Has Been Arming Pilots With AK-47s? 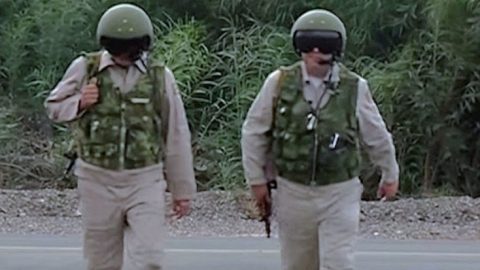 It may seem like an unusual sight to see, but Russian pilots were spotted recently brandishing AK-47s. Many are wondering why would pilots need such heavy firepower despite their flight roles. In simple terms, because what goes up, can come down.

As Russia’s conflict heats up in war zones the situation becomes much more hazardous. So the Russian Air Force has armed pilots with weaponry in the event of crashes or enemy encounters.

“As Russia continues to conduct close air support for the ground forces, they increase the risks to their own forces. It is only a matter of time before we see videos on YouTube of Russian Mi-24 Hind helicopters being shot down.”

Although pilots are equipped with standard sidearms, the practice of assault weapons is nothing new. Soviet soldiers and Air Force units have used the AK-47 as far back at the early 1950s to quell uprisings in East Germany. History suggests that the AK-47 was present during the Korean War, but not used in favor of the SKS not wanting to leak assault weapon technology.

“The AK-47 was only used by the Soviets during the conflict, but it was not issued.”

Their methods are preparing them for a worst-case scenario in the face of danger. It’s safe to say that whoever shot down your aircraft probably has you outgunned. The use of assault weapons creates a more even playing field in a hostile environment.