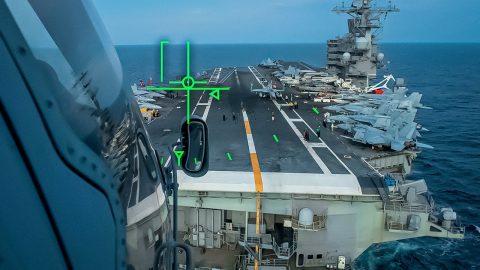 The term ball is short for “Meatball.” It’s used to refer to the visual reference system utilized by Navy and Marine Corps pilots during landings on carriers or shore-based runways.

An optical landing system provides information on the glide path to pilots during the last phase of landing. The lights employed on the system feature visual cues to incoming aircraft.

The lights would tell the pilots if they were too high, low, or on the glide slope. By having this, pilots could estimate the path by keeping the ball centered and aligned with the green datum lights.

A glide slope is the ideal line that the aircraft should follow in order to have a safe landing. If they “got the ball,” their tail hook would successfully connect with the arresting gear cable.

If ball calls are requested, the pilot will provide information on the plane’s tail number, aircraft type, ball, and fuel state.