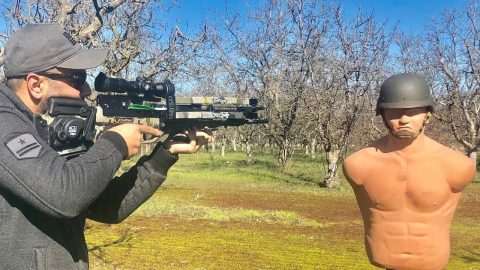 Edwin and Gasparito are back at it again to hilariously test out how the TenPoint Nitro XRT crossbow does against an Army helmet. Spoiler – it works. But you probably already figured it would.

The TenPoint Nitro XRT is one of the top crossbows on the market. It’s got RX7 cams and a Vector Quad 4 cable system for crazy power and accuracy. The center-mounted riser makes it light and smooth and the ACUdraw PRO lets you draw the crossbow with silent stealth. You can see for days with the EVO-X Marksman Scope.

But before they get to testing out the crossbow against the .5 inch Army helmet, Edwin first tests out a traditional bow and a compound bow on the unfortunate, newly-mustached “Mr. Gonazales,” who Gasparito jokes looks strikingly similar to his cousin he hasn’t seen in 20 years.

The arrow from the traditional bow, Edwin explains, travels at 150 ft/second. The compound bow is about 300 ft/second. This sets up a nice comparison for the crossbow which gets 470 ft/ second.

The video is a bit long, but it’s a good demonstration and good entertainment. If you’re just here for the crossbow, then 8:11 is where you’ll want to start…but we recommend you not miss the facial hair shenanigans.