WWII Vet Returns To The Plane The Dropped Him Over Normandy 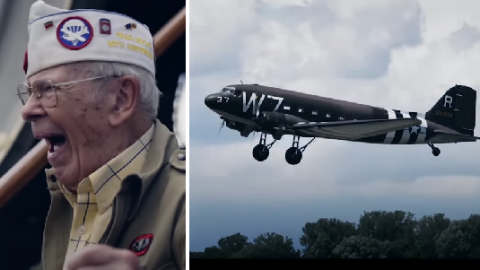 At age 92 Les Cruise has seen a few things in his life, he’s also seen the some of the most brutal conflicts in human history. Cruise witnessed the carnage of World War II when he jumped from a plane into Normandy, France on D-Day. A lot has happened in those 74 years but he still remembers the day so vividly and now has the opportunity to return to the plane that took him there.

Orphaned at age 7, Les Cruise learned the importance of family and more importantly the importance of his country. So at age 18 he joined the war effort and found himself preparing to jump into action over Normandy. The atmosphere in the C-47 was tense as Cruise and his fellow soldiers heard the gun blasts all around them. Despite the dangers, they showed courage and jumped, their first step into the biggest war in human history.

Les Cruise survived the ordeal but not everyone in his unit was so fortunate. He speaks of seeing his friends die on the side of a road, doing everything he can to keep them alive but his efforts are in vain. Now all these years later Les Cruise finds comfort as well as peace through painting and knowing he has brought up a wonderful family.

Now he joins his family on the very same C-47 that dropped him over Normandy to recreate the experience of the 82nd Airborne Unit. Check out his return to the skies in this clip from his storyAll American.