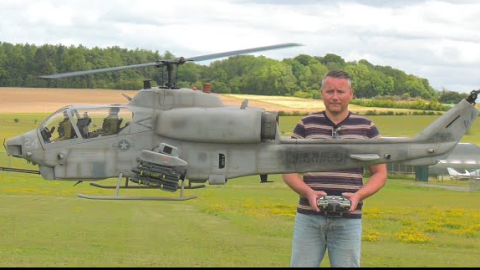 Want to find in a new hobby? How about flying some heli? There’s a whole world out there dedicated to those RC helicopters (radio-controlled helicopter) enthusiast, and these people are getting excited about a specific model of a scale helicopter. — The Bell AH-1 Cobra Attack RC Helicopter.

This model aircraft is based on the world’s first dedicated armed attack helicopter. The Bell AH-1 Cobra is a member of the prolific Huey family, it is also known as the HueyCobra or Snake. It is a single-engined attack helicopter developed and manufactured by the American rotorcraft manufacturer Bell Helicopter.

The Snake was an important aircraft in the history of war. It first flew in 1965 for the U.S. Army for decades. Today, AH-1 twin engine versions remain in service as the primary attack helicopter of United States Marine Corps (USMC). But just like the real thing, you will have to learn the construction of the RC helicopter first before taking it to a flight.

Each model of RC helicopters is different in aerodynamics and just like a real pilot, you’ll have to train first before taking it to the runway. If you’re up for this craft, you have to take time learning the basics and acquire mechanical and electronic skills. Also, better ready your wallet first, because this hobby isn’t that cheap.

Check out the video below to see how Bell AH-1 Cobra Attack RC Helicopter flies.