$1 Billion Worth of US A-10s, Take off Simultaneously at Full Throttle 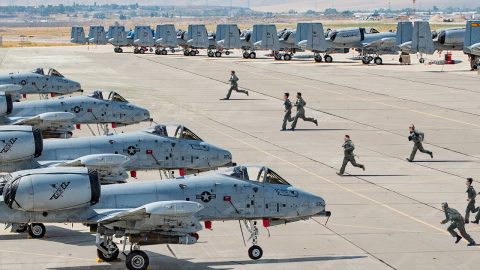 Warthogs have been a household name for quite a long time, even though they’ve been out of production for decades.

When the production line closed in 1984, a single A-10 would cost around $18 million. In today’s money, that would be equivalent to approximately $46.3 million.

Being a fairly old aircraft, the A-10 has seen a lot of upgrades throughout the years to make it as competent as newer aircraft designs. Between 2006 and 2010, the A-10 Precision Engagement Modification Program updated all A-10s to the A-10C standard.

The upgrade features a new flight computer, glass cockpit, wing design, and the ability to employ JDAMs, WCMDs, and GBU-39s.

Fast forward to 2020, and the A-10 is again getting a few more upgrades to keep it relevant for years to come. Most of the improvements focused on hardware integration of a new High-Resolution Display system, jam-resistant GPS, and ARC-210 radio upgrades.