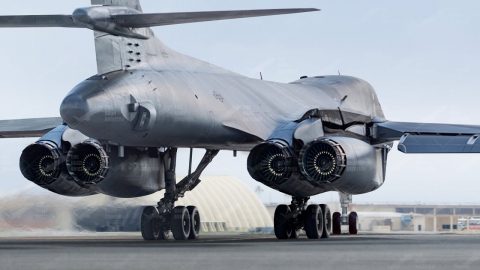 The Bone In Action

B-1 Lancers were envisioned as Mach-2 capable bombers with the B-52’s range and payload. If everything had worked out perfectly, it would have replaced the B-52 and B-58 entirely.

Nevertheless, the B-1B Lancer entered service in 1986 and is still used by the USAF today.

A Lancer crew consists of two pilots and two Weapons Systems Officers. In the video, we can see the crew enter the aircraft’s hatch from a ladder behind the front landing gear.

Later on, we even get to watch a Lancer get refueled by a KC-135. Frequent refueling significantly extends the Lancer’s already-impressive 6,500-mile range.