Not Only Is This Rc F-35 Huge, The Pilot Flies It Inches From The Ground 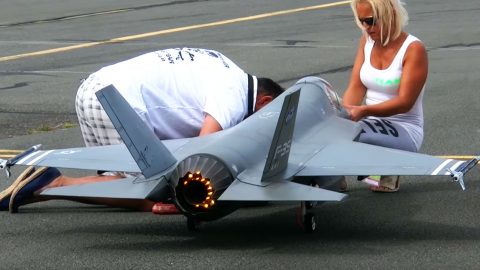 Say what you want about the F-35, but its a pretty high tech machine. Personally, we think it’s also one of the most beautiful modern planes ever, its lines not only beautiful but specifically carved to avoid radar. We’re anticipating a lot of criticism for this but hey, we’re all entitled to our own opinions.

As for this video, you’ll be seeing a man by the name of Christian Gschewenter who both built and manned this massive Rc F-35. He will be behind the controls of this model and let us tell you, he is good.

Keep and eye out at the 5:57 mark. He literally taps the tarmac.

The only thing that we know about this model is that it weighs approximately 40 pounds. That’s a bit of weight to push around but with that mini jet engine behind it, it didn’t have any problems whizzing by like crazy.  The whole video is about 8 minutes long so we don’t expect you to watch the whole thing, so feel free to skip around.

We recommend watching the takeoff and landing of course, and in the quote above we gave you the time to watch out for. We’re not sure, but seeing him fly it seems like he meant to do that little tap on purpose. If he did, that’s pretty impressive.